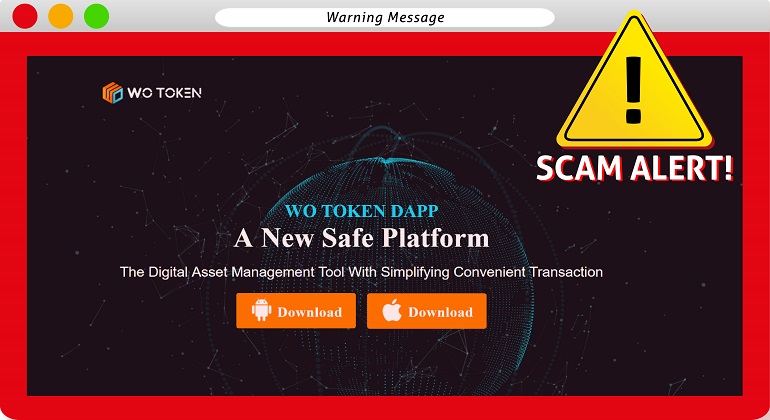 The Chinese authorities find out about the company on 9-16-2018, although it was established in July 2018. Due to WoToken’s publicity, they would lure people in with the promise of earning money through compensation plans and ROI WoToken offers. This project was based on a classic financial pyramid project. They claimed they help the investors to join other investors and form groups for creating more profit.

There were some clues

Unsurprisingly, WoToken was another company without the name of the owner. Moreover, considering the domain name we found out that the information used was not real. There was some evidence that proved it could be a scam, like not being on the list of Better Business Bureau, not offering Retail products, and not being registered with the SEC.

They used a professional profile with fake information along with many reports of fake activities on its website to lure people in and eventually they took hold of the wallets, free and extorted the money. They scammed the investments of 715,249 people and extorted 46K Bitcoins, more than 2 Million Ethereum, 292K Litecoin, 56K Bitcoin cash, 684K EOS, and several other smaller Cryptocurrencies. Reports calculated the final amount, about $1.1 Billion.

In this regard, a 6-hour trial was held in which the court was suspended to 14 May due to its complexity. Since the culprits have criminal records as well the trial is even more complicated but their record will cause them heavier sentences. We can’t precisely predict the court’s decision but it seems that along with a fine they could be sentenced to imprisonment from 6 months to 11 years. We will look forward to the trial.

All these fraudulent affect Bitcoin in their way. Every time such cases happen Bitcoin’s prices experience a sharp downward trend. If history repeats itself once again, this scam wouldn’t be in Bitcoin’s favor and it would cause a huge loss. Regarding such effects, we can mention PlusToken as an obvious example. In the PlusToken event, Bitcoin’s prices went through a noticeable downtrend in March 2020 Bitcoin hit its lowest price level after a long while of good performance it dropped over 50% to below $4,000 level.

Many scams happen and there are always many clues that can lead you in the right way and help you decipher the scams from other companies. Hence all these cases are somehow related to cryptocurrencies and their platforms, each time a scam happens the prices of Bitcoin is sharply affected by it. Although Bitcoin has been through a noticeably great performance lately, the latest scam may affect its performance.

Relaunch of Ethereum swaps: Aligned incentives are a Crypto superpower