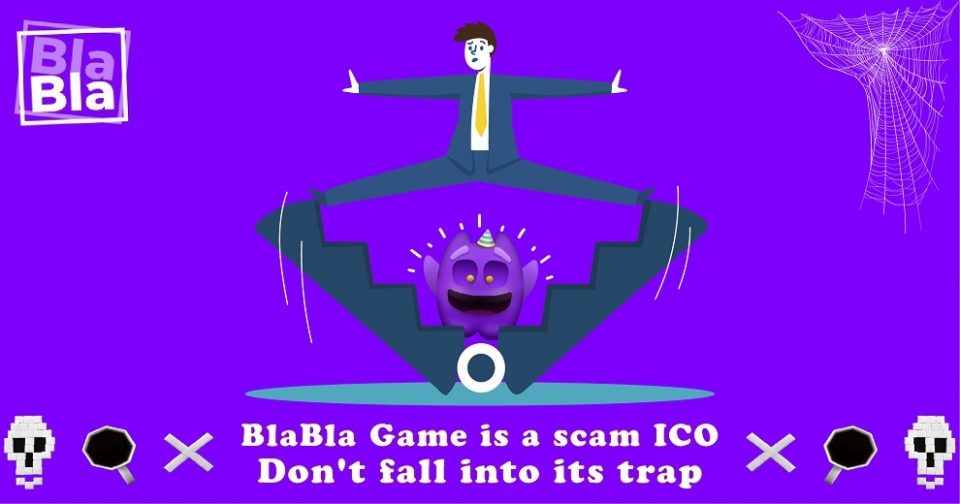 https://BlaBlaGame.io presents a Rock-Paper-Scissors game in Crypto. In this article, Antidolos search for Crypto scam names reviews this project and introduces you to the Bla Bla ICO and whether it’s beneficial to invest or suffer much loss from entering it.

Does Bla Bla ICO Have a Creative Idea?

The team’s idea is to do their best to provide the best experience to distinguish users. BlaBla Game (BLA) is the first game of its kind, and that’s why they believe it will conquer the Crypto market. But isn’t that a bit of an exaggeration?

According to the process of the article, by analyzing the essential things in this game, we realized that this game could be more attractive. Although their idea is interesting, it is not creative or new. We don’t want to enter the negative phase from the very beginning, so according to the idea that the creators of the game have BlaBla Game (BLA), and in this section. Do you think BlaBla Game 2023 is a scam? we will analyze the project further.

According to the review, we discovered the BlaBlaGame WHITEPAPER presents the world’s first Rock-Paper-Scissors game in Crypto. Paying attention to minor details can turn an average design into a catchy and impressive design, resulting in a beautiful Whitepaper design.

The Whitepaper is not very strong in terms of graphics. Although they tried to describe all the financial details, their growth, development strategy, and revenue model are unclear. They explained enough about the token, but they don’t seem to have a plan for profitability. Also, their Whitepaper was severely lacking due to a lack of team, location, office details, and legal issues. They prefer to stay in the shadow. There is no proper game-type content or content related to these types of tokens. The overall score is negative. It’s too soon to think BlaBla Game 2023 is a scam. Stay with Antidolos Blockchain Basics Learning.

Do Not Expect Legal info!

BlaBla Game (BLA) stated that the company assures its customers to act according to the rules. The contact info you provide and verify your identity by AML & KYC is required by law and internal company policy. So from the privacy, they are valid.

You may think that I am a harsh critic. Still, by examining the site, they need to be a logical explanation from the legal point of view for people who want to buy game tokens. BlaBla Game 2023 is a scam and doesn’t register any company. They do not have any certificate or license to start this business, and the Bla Bla ICO is not under any country’s tax laws and company registration. They can quickly disappear.

Where is The Bla Bla ICO Location?

How important is the location of a business? We need to check Google’s behavior and documentation to answer this question. Google shows users a site that is located in the user’s own country.

Considering that having an office is necessary for every company and the location of the company will increase the credibility of that company, by checking the https://BlaBlagame.io website, we did not find the desired location.

When I got to the location section, I was shocked. There is no location section on this site. I explore all the search engines, and the result was negative. BlaBla Game (BLA) has no actual location, and it’s a severe red flag for ICO scams alert 2022.

The BlaBla Game (BLA) is one of the least active ICOs on social networks and has few followers, especially on Instagram. They have pages on Twitter, YouTube, and Medium. But we can say that they have very little activity or interaction on Internet pages, especially on Facebook, LinkedIn, and Instagram pages. Their Instagram is very weak and, in total, has 20% of activity.

Of course, we mention the Antidolos tools found 15% fake followers on Twitter and YouTube. They primarily use Telegram to communicate, and there are about 40% fake followers on Telegram. Their social media activity is deficient, which is a defect for a business that works in the gaming industry. We conclude the socials section with a result. They don’t have money to pay for ads, attract audiences, marketing, and professional content production.

They say BlaBla Game (BLA) is a hidden gem and one of the most promising Blockchain games in 2023. But do you believe that?

After a complete review of the idea, revenue model, site faults, project status in social media, and all the strengths and weaknesses we found, it’s time for the financial situation of Bla Bla ICO. It’s the Achilles heel of Bla Bla ICO and assures us that could be a poor investment and maybe a complete failure.

According to the information published on the BlaBla game (BLA) Telegram channel, they started the Initial Coin Offering (ICO) in May 2022. At the time of writing this article on December 2022, +2,500 users joined this platform and raised +$27,000 in their first ICO phase.

But why does Antidolos use the word “fake” for this project and published info?

BlaBla Game 2023 is a scam or frustrating Crypto game. Players can use BLA tokens to play Rock, Paper, and Scissors on the platform. Winners will receive prizes, which will be BLA tokens. They claim users have already played this game 85,000 times. And at the time of writing, the platform has over 2500 players. We suggest you check https://BlaBlagame.io to find the truth.

They lie that Bla Bla ICO was introduced as an IEO in August 2022 and is still ongoing. While so far, they are not listed in any exchange, and the only way to buy BLA tokens is through the project site.

The most critical weaknesses and bugs do not end here. The BlaBla Game (BLA) SMART CONTRACT was created on the Binance Blockchain in October 2022. As of writing this article in December 2022, they have no holder, and the founder owns 100% of the tokens. On the other hand, how could they have started the ICO 5 months before the token launch (May)? They created the SMART CONTRACT and BLA token in October and did not distribute any tokens until December. Don’t those 2,500 people who invested more than $27,000 expect to receive their tokens?

On paper, their token distribution is accurate and practical. Marketing, team, bonuses, sales, and even charity are all well explained. But in reality, nothing goes according to plan. With a simple search, we found out that they have no budget for ads, and Antidolos assumes, a project that doesn’t spend money on marketing and advertising doesn’t intend to stay in the market. On the other hand, 10% of the tokens are allocated to the team. A team that stayed in the shadows and use fake names and photos.

Their Current Status in The Market

BlaBla Game (BLA) is a cool idea and could find a good place in the crowded Cryptocurrency market. The current situation is very bearish -we know that- and when strong projects like Luna and FTX lose 99% of their market cap, we do not expect the BlaBla Game (BLA) to give good profits in the short term.

We expect a bit of honesty, transparency, and marketing, which unfortunately we didn’t find in this project. They exaggerate their status and try to show themselves as a successful project with a high number of users. But this is not true. If you check https://blablagame.io, you will find they have only a few active players. Also, they do not have any AMA, Ads campaigns, tutorials, or plans to be listed on exchanges. If they don’t change their situation soon, don’t start extensive marketing campaigns, and can’t attract private investors in the shortest time, they will sink into this smart market.

Does BlaBla Game (BLA) Have a Team?

This team comprises 6 people in charge of all departments. Let’s check them out and see how this team fares without a consultant.

Let us skip the other names. What is certain is that they don’t want to reveal their real names and they abuse other people’s names and photos. But if they intend to stay in this market, why should they do this? We leave the answer to you.

In a bear market, some investors buy the dip by investing in digital assets at deep bearish, considering the previous highs of Bitcoin and Ethereum.

Others take the risk and invest in popular Cryptocurrency projects through initial coin offerings (ICOs). It is not a financial tip or advice, but investors should consider the following investment opportunity.

But in the meantime, it is a fact that with the reviews Antidolos did in the above sections of BlaBla Game (BLA), considering its low token purchase, which is decreasing compared to the supply of tokens, we do not suggest investing.

5 reasons you should not fall into this project:

A Last Word About The Bla Bla ICO

BlaBla game 2023 is a scam or not? The top NFT scams and ICO token scams have some commonalities. Antidolos ICO rating and review concluded by surveying https://BlaBlagame.io, socials, and all financial details. Because of the small number of participants, fake team, and lying about everything, unfortunately, we do not suggest buying tokens from this game, but maybe there will be a better procedure in the future.

Although we’ve provided various examples of Crypto scams, you still have to take responsible actions for a good profit. Also, if you want to learn how to spot a fake NFT, the methods and guides on Antidolos Basics Crypto Learning can be pretty helpful.

Always stay vigilant while doing your due diligence. Endeavor to read other posts in Antidolos latest Blockchain news, and don’t forget to leave your comments and share them with others.